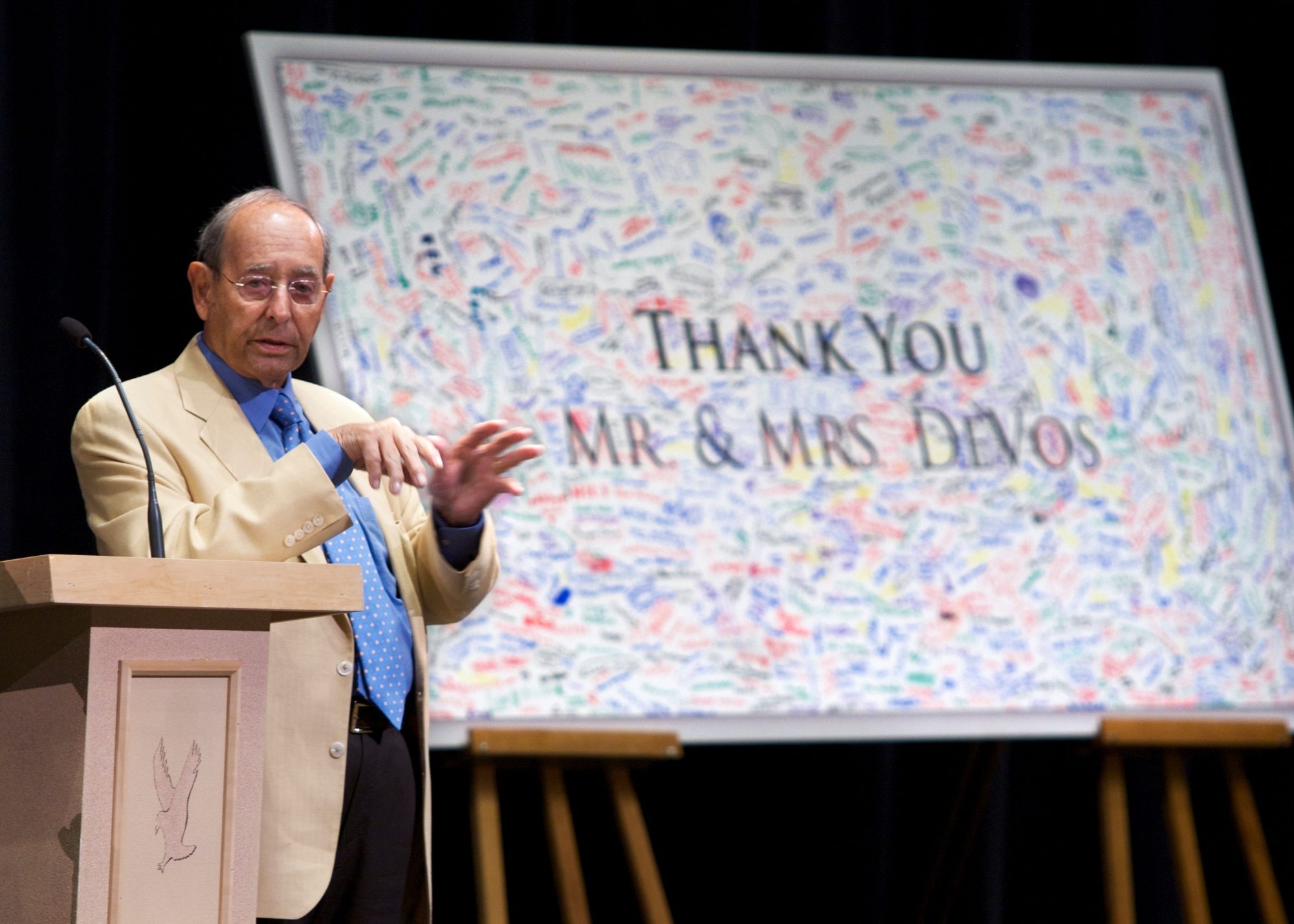 Rich speaking to a group at Grand Rapids Christian High School, his alma mater. He was grateful for his experience at the school, where he was encouraged to pursue his leadership abilities by Dr. Leonard Greenway, a Bible teacher.

A legacy of giving

“We had the joy of giving away money,” Rich often said, “from the first days of our marriage.”

Because of their Christian belief in tithing – returning at least a tenth of the Lord’s blessings to His work and people in need – more people around the world heard the Gospel of Jesus Christ and churches grew stronger in their missions. Inner city and Native American children, as well as college and university students, have had opportunities for better education. Non-profit organizations were able to raise more funds and serve more people, and more children received better medical care.

Rich and Helen DeVos talk about the origins of a lifetime of philanthropy, starting with the $15 they set aside from the first $150 they earned.

Driven by faith and compassion

The Richard and Helen DeVos Foundation has generously supported major projects at churches, schools, hospitals and arts organizations. But people also have related stories about how Rich’s compassion for individuals in need prompted him to buy furniture for a wounded Vietnam War veteran and his new wife or ensure a small hospital in Fiji was updated with modern medical equipment.

Driven by the Biblical principle that to whom much is given much is expected and by his Christian conviction that tithing can help do God’s work on earth, much of Rich and Helen’s giving has focused on Christian organizations and spreading the Gospel. His first major project was his three decades as chairman and principal supporter of Gospel Films, a producer and distributor of Christian films worldwide.

As a Christian who also appreciated the power of communication, he gave the lead gift along with his wife Helen to build a communication arts and sciences center at Calvin University, a Christian university in Grand Rapids that he attended briefly and where she obtained her teaching degree. 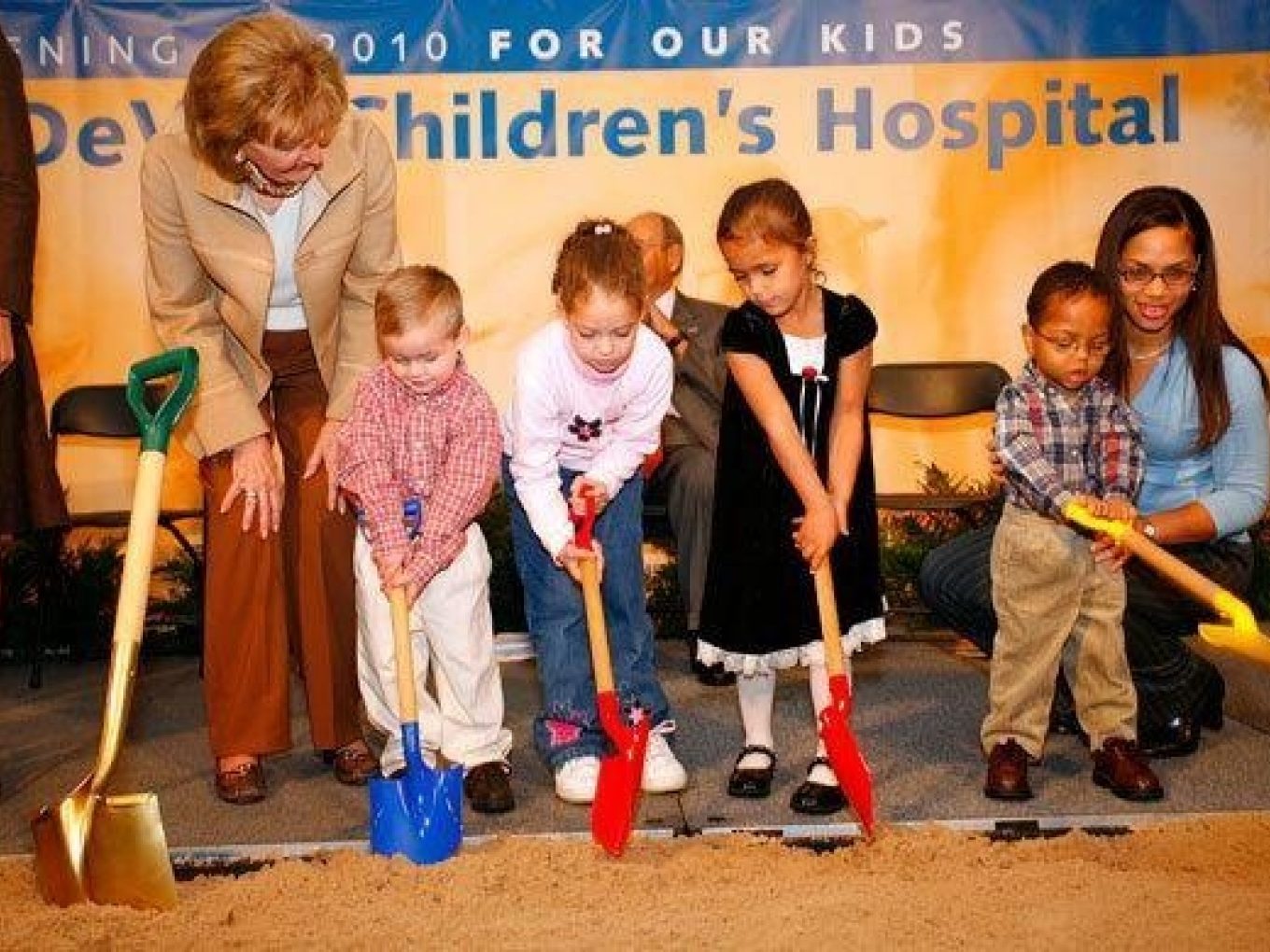 1/4
Helen at the groundbreaking ceremony for the Helen DeVos Children’s Hospital in Grand Rapids, Michigan, in 2006. Rich and Helen’s children and their families gave the lead gifts to build the hospital in honor of their mother. 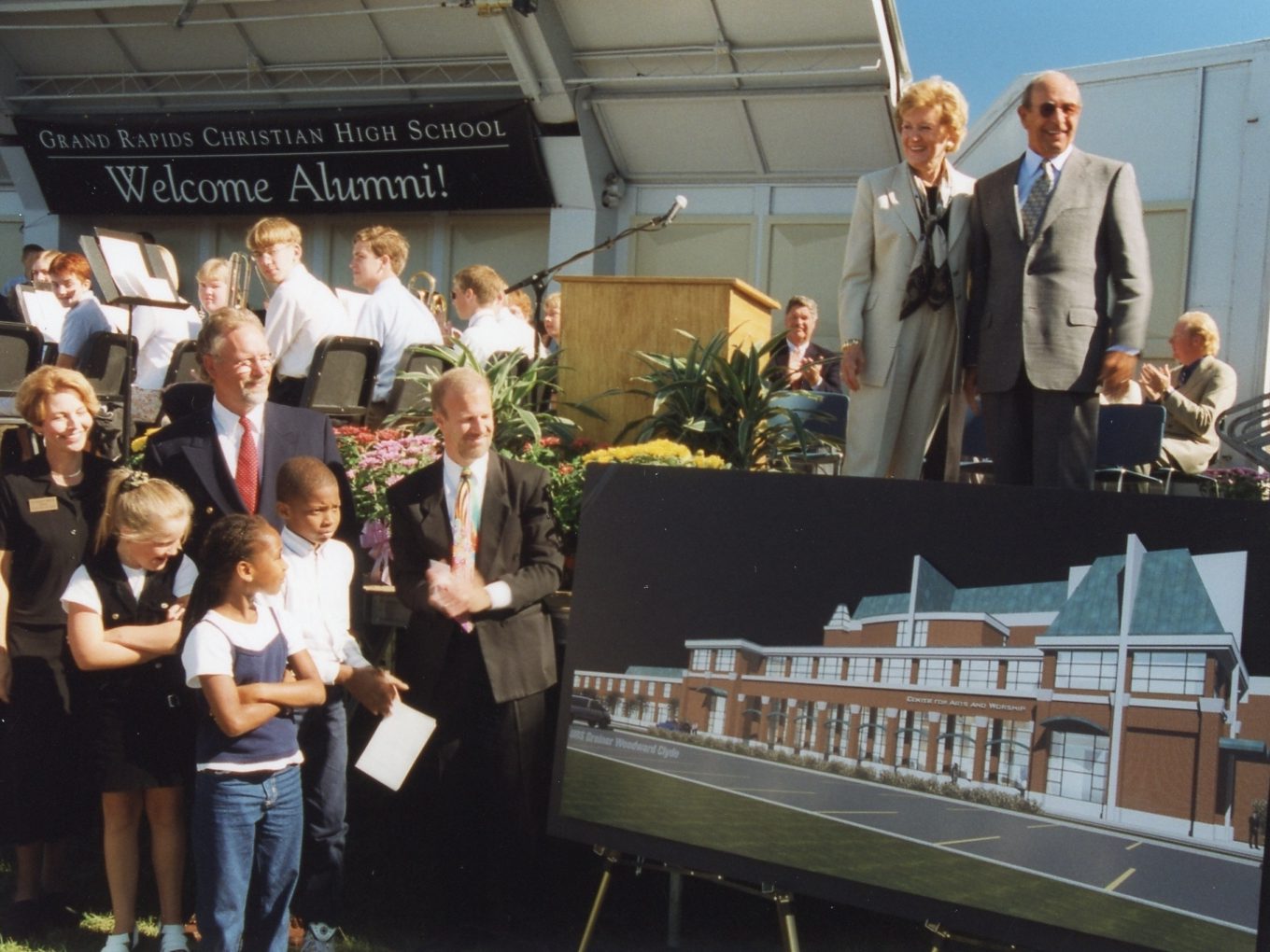 2/4
Rich believed strongly that the solid foundation of faith and education he received as a student at Grand Rapids Christian High School helped shape his life and career. He and Helen went on to generously support Christian education in Grand Rapids as well as in New Mexico. 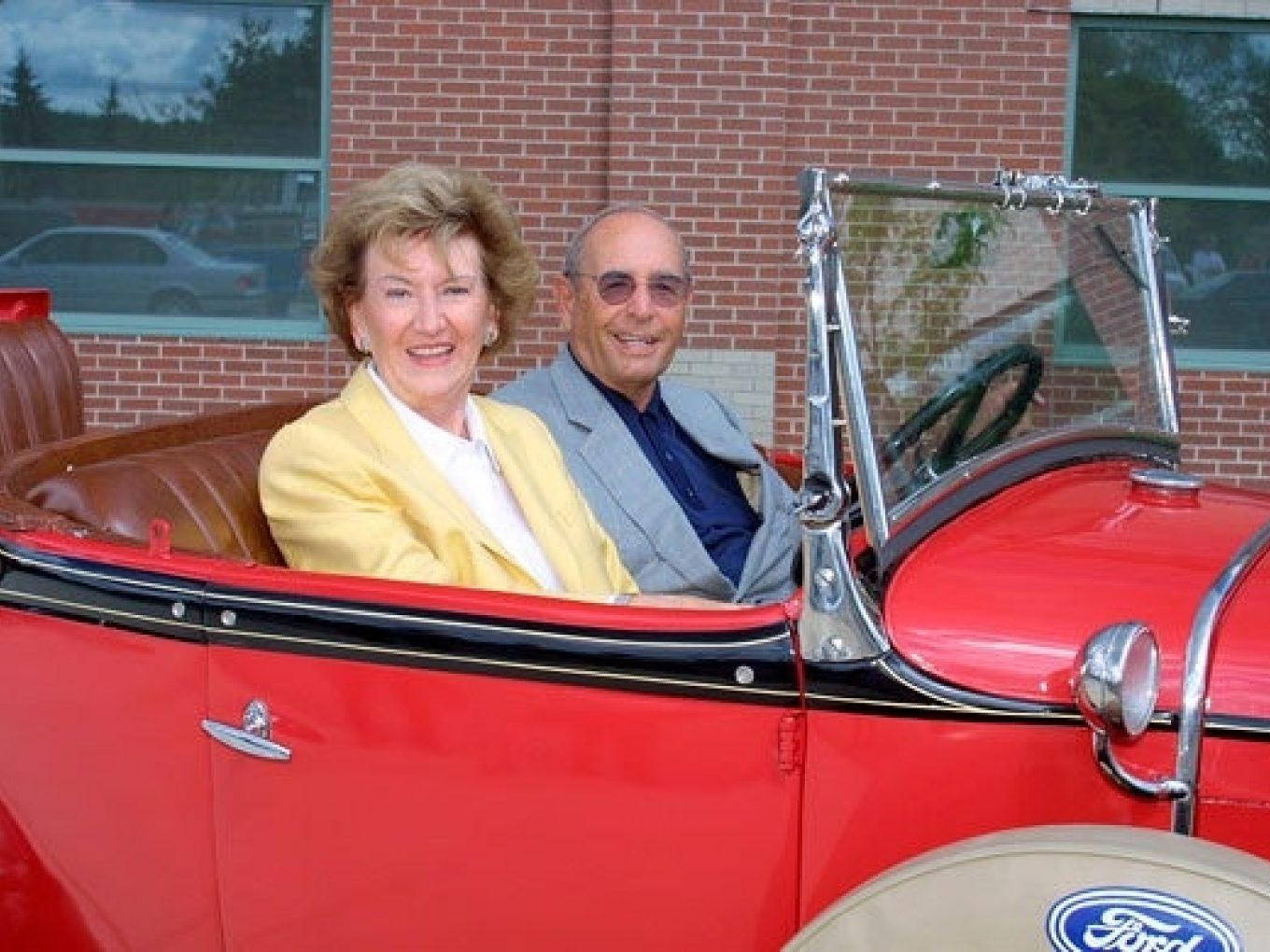 3/4
Rich and Helen DeVos sit together in a Model A Ford on display at Grand Rapids Christian High School. Rich and Jay Van Andel met in high school when Rich began paying Jay a quarter a week for a ride to school in his car. 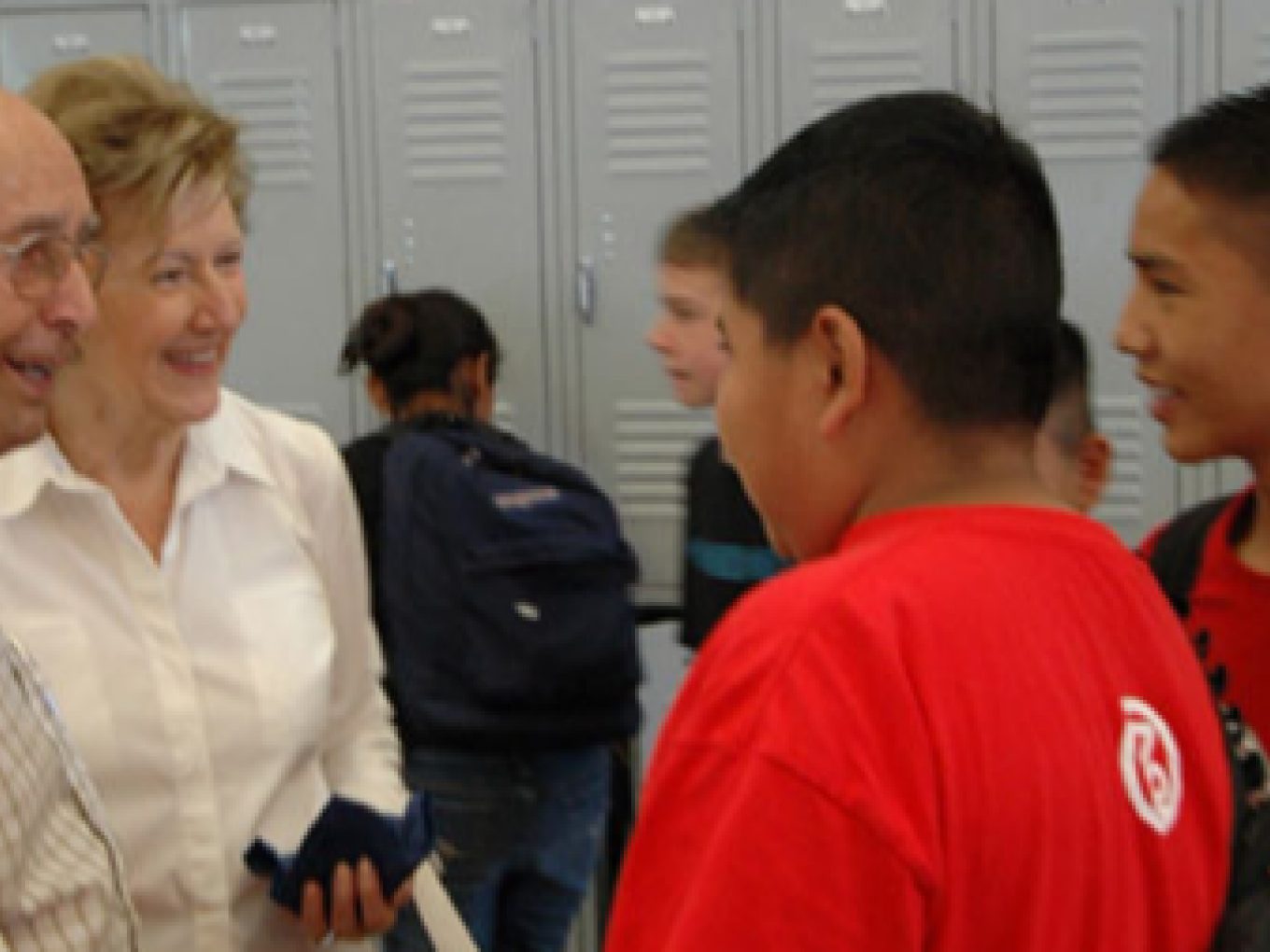 4/4
Rich and Helen were longtime supporters of Rehoboth and Zuni Christian Schools, which were founded by the Christian Reformed Church in 1903 as ministries to the Native American people in Gallup and Zuni, New Mexico.

One of the most significant contributions for Rich was his and Helen’s giving to Grand Rapids Christian Schools, including the DeVos Center for Arts and Worship. Rich said he was gratified to support the high school where a positive atmosphere helped set the course of his successful life.

Realizing children are our future, the Richard and Helen DeVos Foundation has been generous to many causes, including activities and services for children in Orlando and Central Florida; schools in Gallup and Zuni, New Mexico, and in Lusaka, Zambia; the field house at Hope College; the downtown campus of Grand Valley State University; and major funding to establish the Helen DeVos Women’s and Children’s Hospital, which later became the Helen DeVos Children’s Hospital.

Each gift was prayerfully considered

While neither he nor Helen sought or expected recognition, their communities expressed appreciation for their generosity with accolades including the William E. Simon Award in Philanthropic Leadership and the Socially Responsible Entrepreneur of the Year honor from Ernst & Young, among many others.

With countless worthy causes, Rich said he and Helen carefully considered each opportunity and prayed for wisdom to invest in things that truly matter – human lives and eternity – and to ensure their giving would be used according to God’s will.

“The Lord has enabled me to have financial success, and I don’t apologize for the success I’ve received,” he said. “But whether you have a little or a lot, something miraculous happens when you tithe.”

The DeVos family raised more than $614,000 through an online charity estate auction featuring some treasured belongings from Rich and Helen’s own collection of art, jewelry, sports memorabilia and personal items.Read about the auction