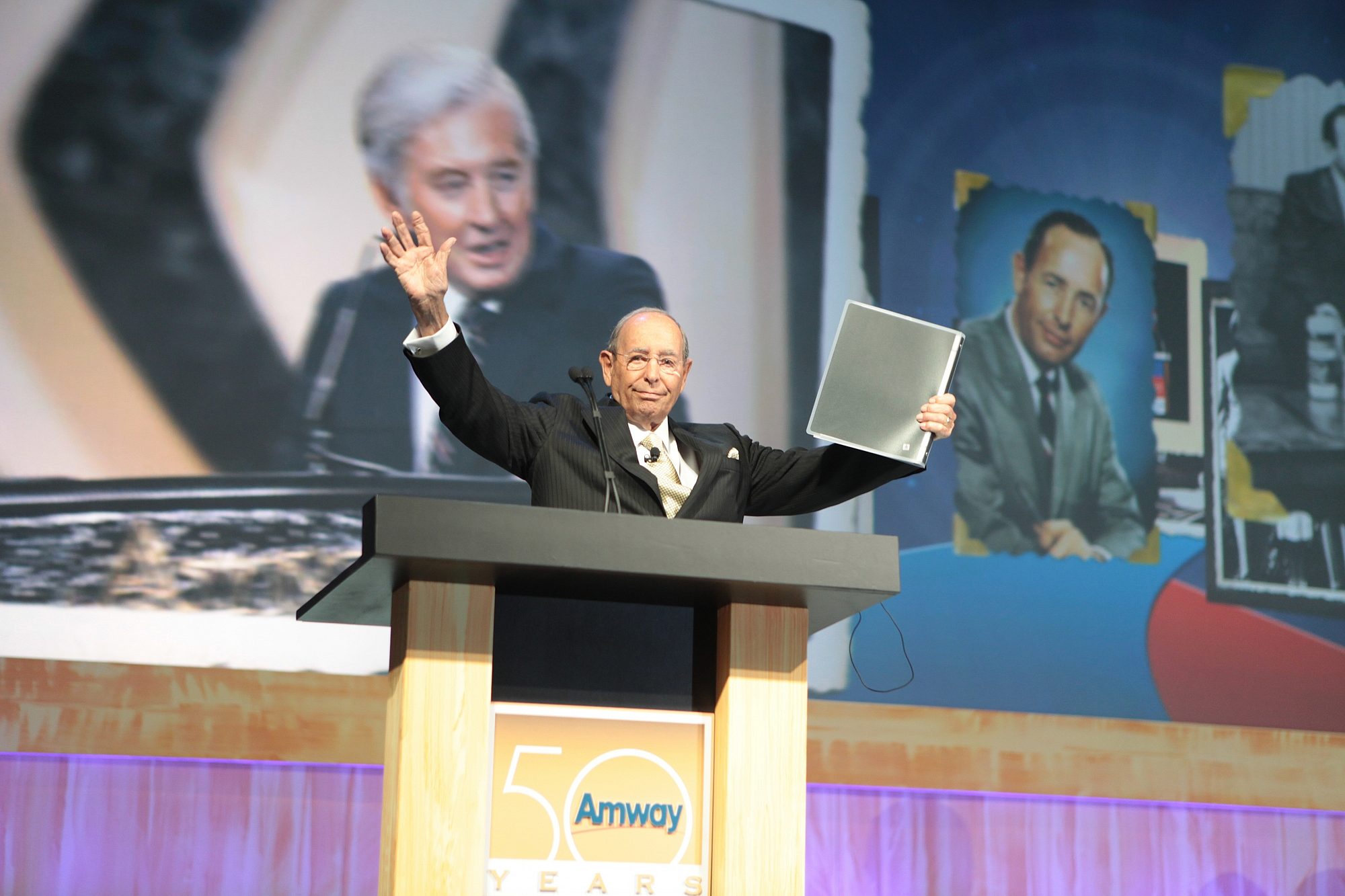 Rich greets the crowd at a celebration of Amway’s 50th anniversary.

Rich DeVos co-founded Amway in 1959 and was company president until his retirement in 1993. He was also senior chairman of the Orlando Magic.

He was one of the world’s most successful entrepreneurs, author of five books, a much-in-demand inspirational and motivational speaker, a community and political leader, and, with his late wife Helen, a generous philanthropist.

In 1949, DeVos and Jay Van Andel, his friend since attending Grand Rapids Christian High School together in the late 1930s, started a highly successful business as independent distributors for Nutrilite. The California manufacturer of vitamins used a person-to-person direct-selling approach that DeVos and Van Andel adopted when starting Amway from their Ada, Michigan, homes in 1959. They refined a direct selling method of offering individuals the opportunity to build a business of their own that became the model for scores of direct selling companies and was the start of a major worldwide direct selling industry.

DeVos wrote five books: BELIEVE!,Compassionate Capitalism, Hope From My Heart, Ten Powerful Phrases for Positive People, and Simply Rich. Released in April 2014,Simply Rich is a memoir reflecting on his work, faith, family and the core values he held onto from his humble, Christian upbringing through his enormous success as co-founder of Amway.

His 1997 heart transplant at the age of 71 was the inspiration for Hope From My Heart, in which he imparts ten lessons for life on subjects including persistence, confidence, optimism, respect and faith. In 2002 he became chairman of the national speakers bureau of the United Network for Organ Sharing, promoting the need for increased organ donations.

DeVos summed up his philosophy of successful living in his first book, Believe!, published in 1975. His second book, Compassionate Capitalism, a treatise on how the wise use of financial resources can help others help themselves, was published in 1993.

He also was a well-known speaker, having appeared before hundreds of thousands of people worldwide. His recorded talk, “Selling America,” received many awards, including the Alexander Hamilton Award for Economic Education from the Freedoms Foundation.

DeVos volunteered his time and leadership to a number of causes, and he and his wife donated generously through the Richard and Helen DeVos Foundation. Their motivation to give was based on their Christian faith and their responsibility as stewards of the financial resources God gave them.

In the 1970s, as chairman of the New Grand Rapids Committee, DeVos was instrumental in the revitalization of downtown Grand Rapids, including the DeVos Performance Hall. He and Jay Van Andel led the restoration of the Pantlind Hotel, which was purchased by Amway and is now the 682-room Amway Grand Plaza Hotel with an added 29-story tower. DeVos and Van Andel also spearheaded the Amway-owned JW Marriott on the banks of the Grand River.

DeVos and his wife used their influence and generosity to stimulate important projects for a healthier Grand Rapids – projects in higher education, health care, economic development, and the arts. The couple focused much of their giving on hundreds of Christian churches and ministries, with a special emphasis on Christian education. In addition, they were major contributors to various national causes that reflected their personal passion for freedom, fairness and free enterprise.

He also shared his Christian faith in his books, speeches and as a guest on national TV and radio programs.