For Rich, faith guided everything he did 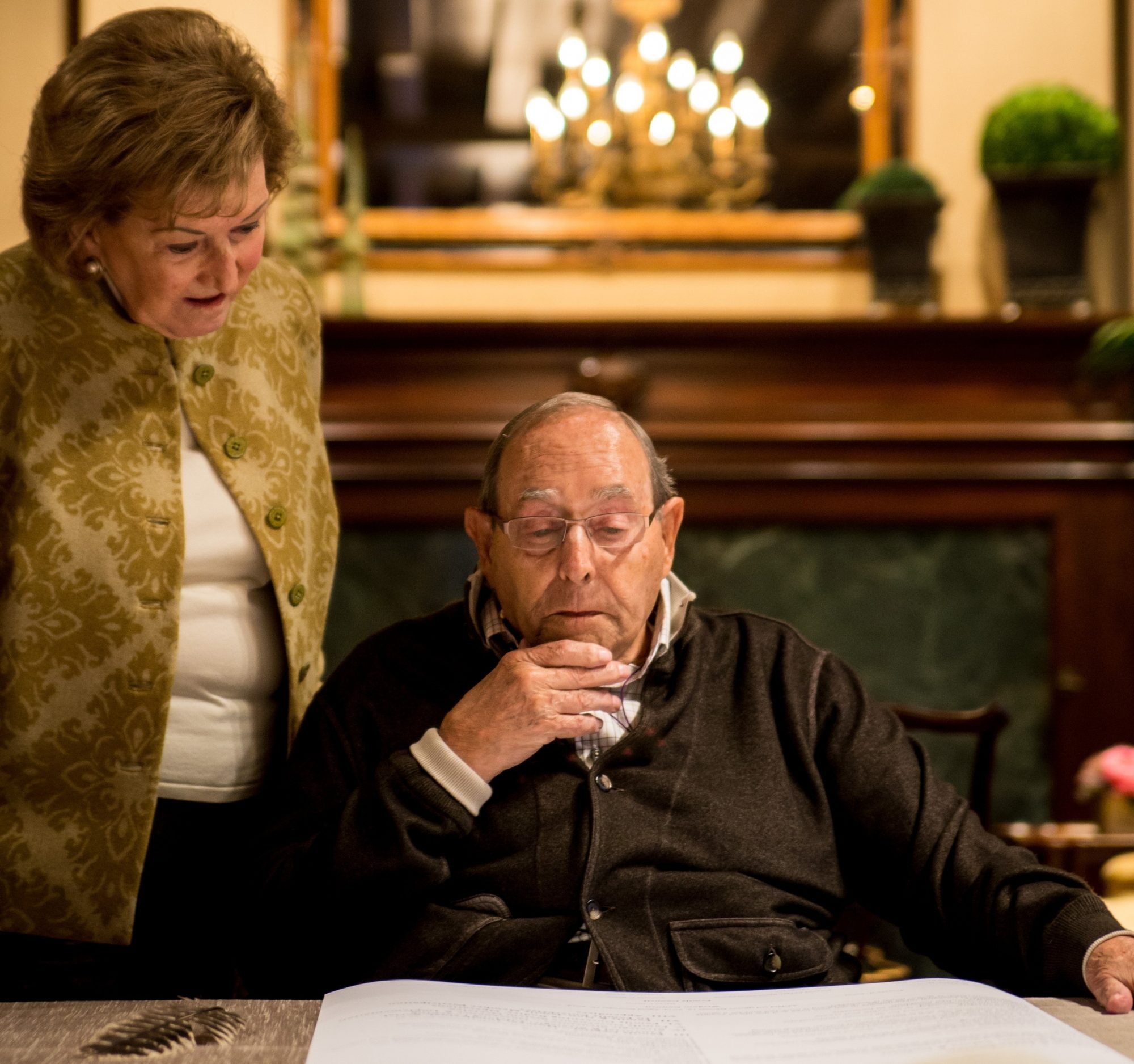 Rich and Helen review a copy of the family constitution, which articulates the family’s mission and values.

Rich was raised in a family where faith was a priority; it would remain the center of his being throughout his life.

That became clear as a group of Detroit Chamber of Commerce members filled the Grand Hotel ballroom on Mackinac Island decades ago to hear Rich DeVos speak. As the man introducing Rich listed some of his many accomplishments, Rich considered the words used: Entrepreneur. Businessman. Leader.

‘Let me tell you who I really am’

Rich made his way to the podium and looked out at the crowd. “Let me tell you who I really am,” he said. “I’m a sinner saved by grace — a Christian, saved by Jesus Christ. That’s who I really am.”

And from then on, Rich introduced himself at gatherings large and small the same way.

I’m a sinner saved by grace — a Christian, saved by Jesus Christ. That’s who I really am.

Faith was a priority for Rich growing up, but when the time came for him to join a congregation and ask to be saved, he hesitated and sought the counsel of a minister. Did he really have a choice in declaring his faith, Rich asked, or was he just fulfilling God’s will?

Rich’s challenge, the minister suggested, was that his God was “too small.”

“Sometimes it’s hard to acknowledge Him because you have to first acknowledge your sinfulness,” Rich recalled years later. “But once you ask God in, you realize God can do anything.”

Rich’s acceptance made God “bigger” in his life, and from that point forward, influenced everything he did, from raising his family to building a global business to donating to improve communities. 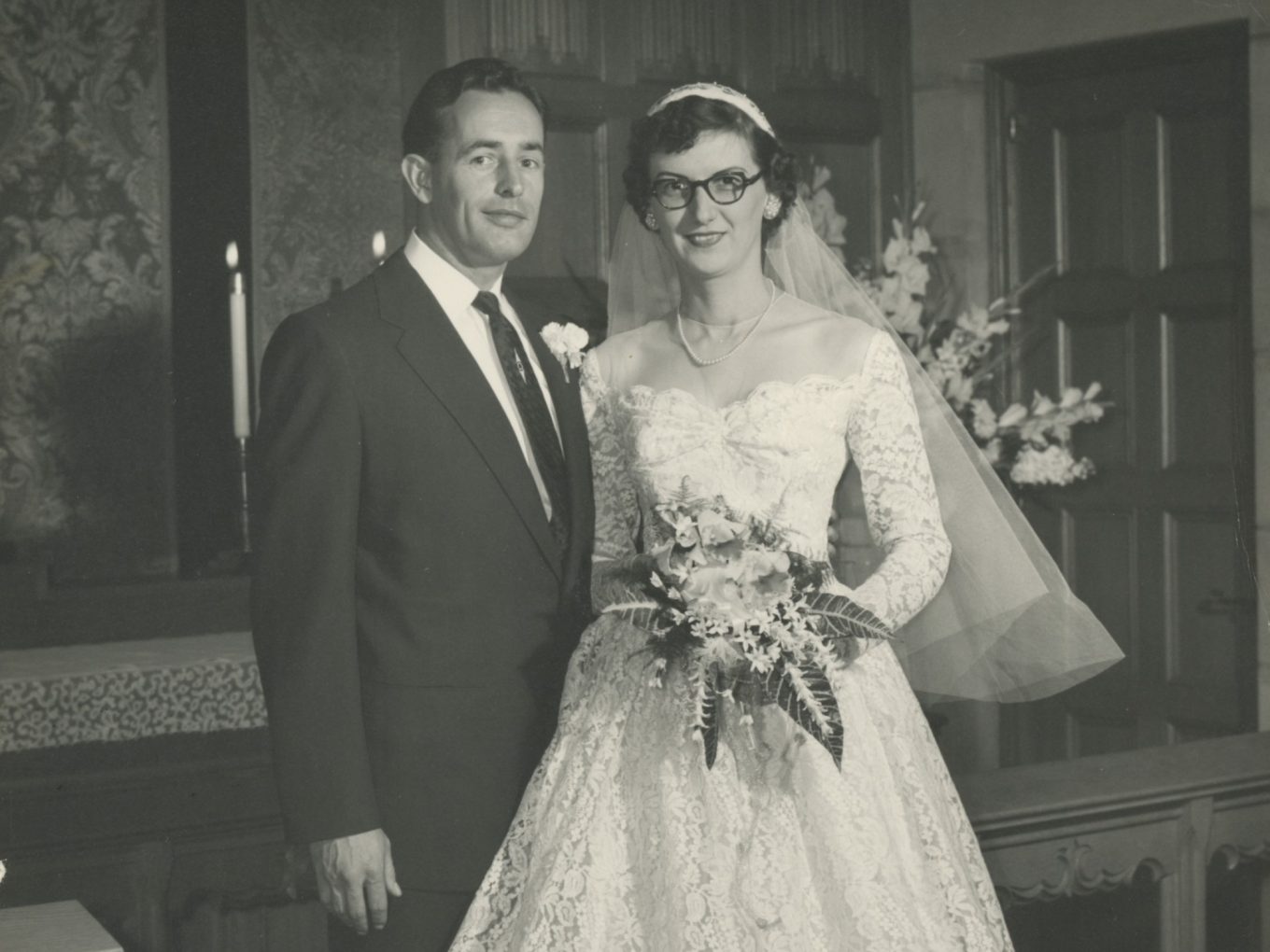 1/7
Rich and Helen’s wedding photo from 1953. As newlyweds, Helen insisted the couple set aside 10 percent of their income to causes near to their hearts. 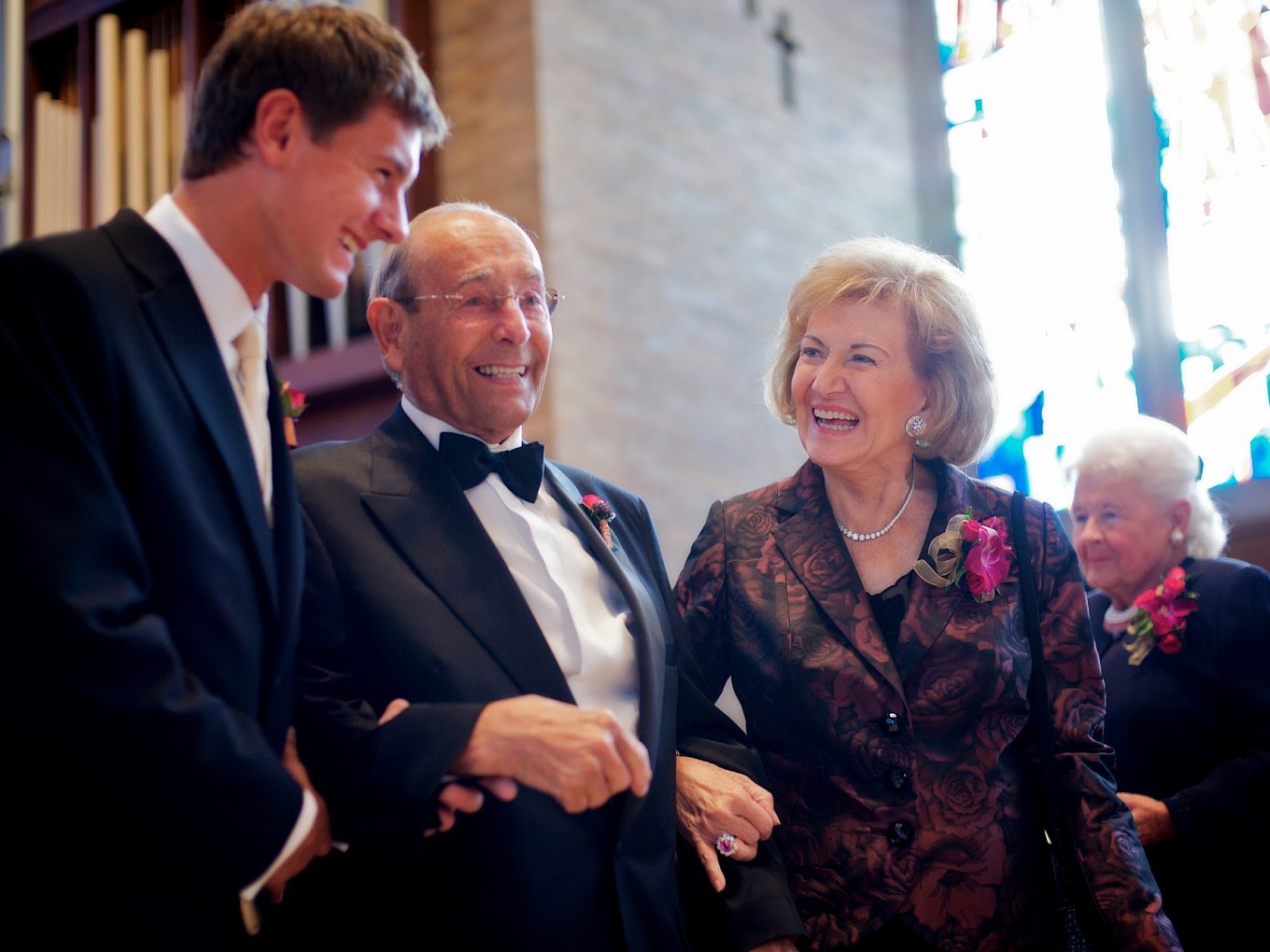 2/7
Rich and Helen are escorted by a grandson at a family event. 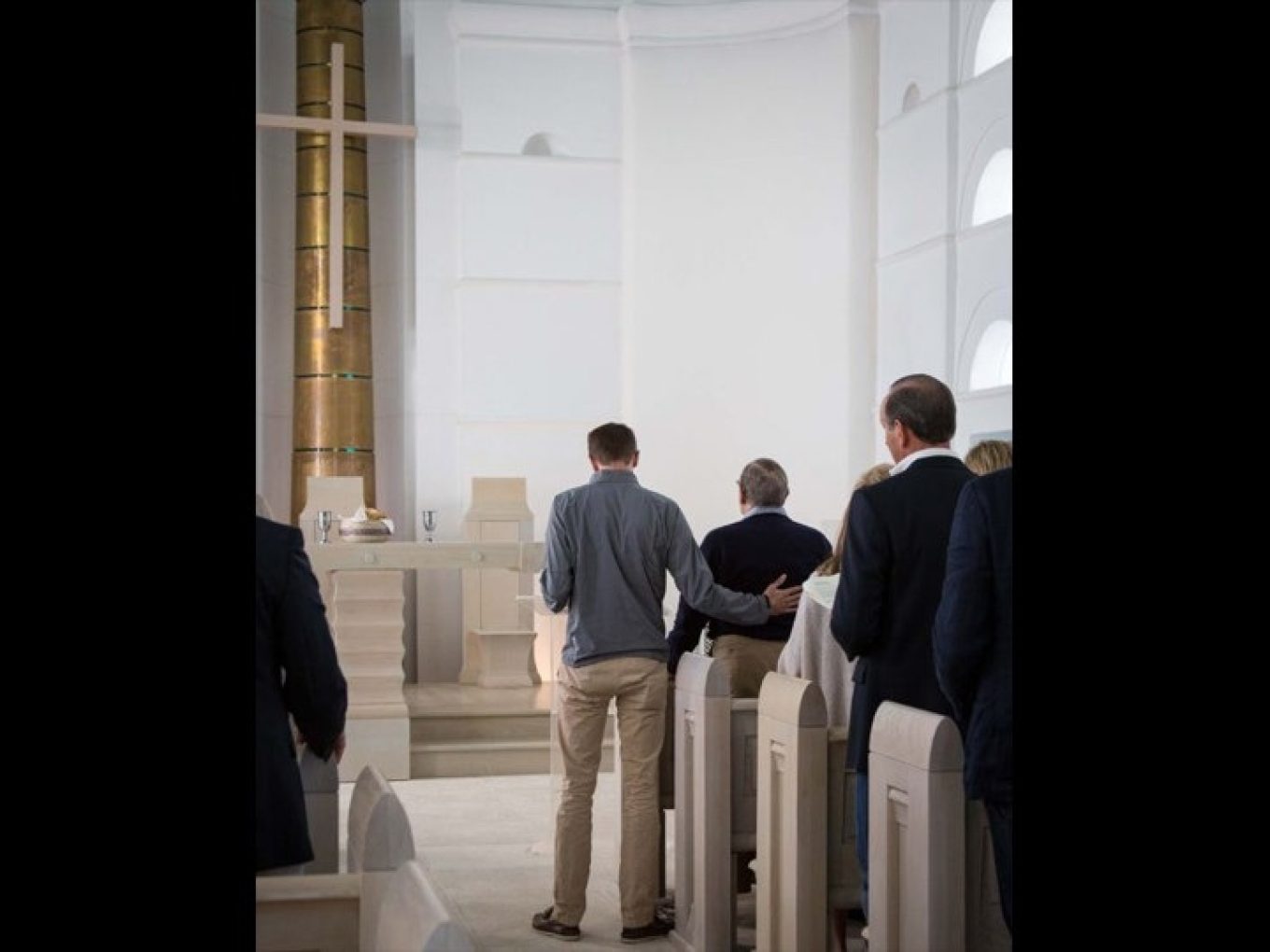 3/7
Rich at worship with his grandson and other members of his family. 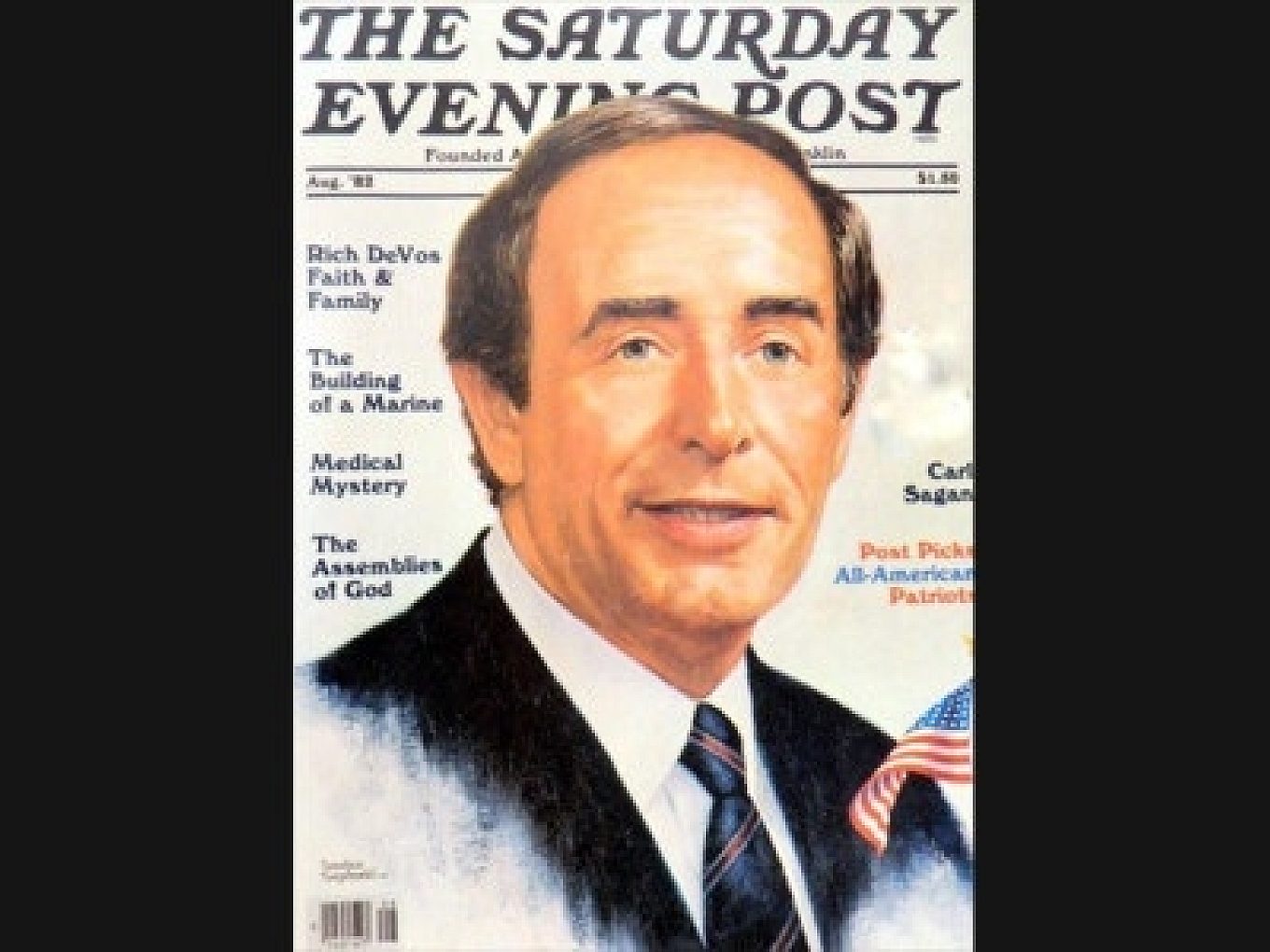 4/7
Rich appeared on the August 1982 cover of The Saturday Evening Post. The story was titled Rich DeVos: Faith & Family. 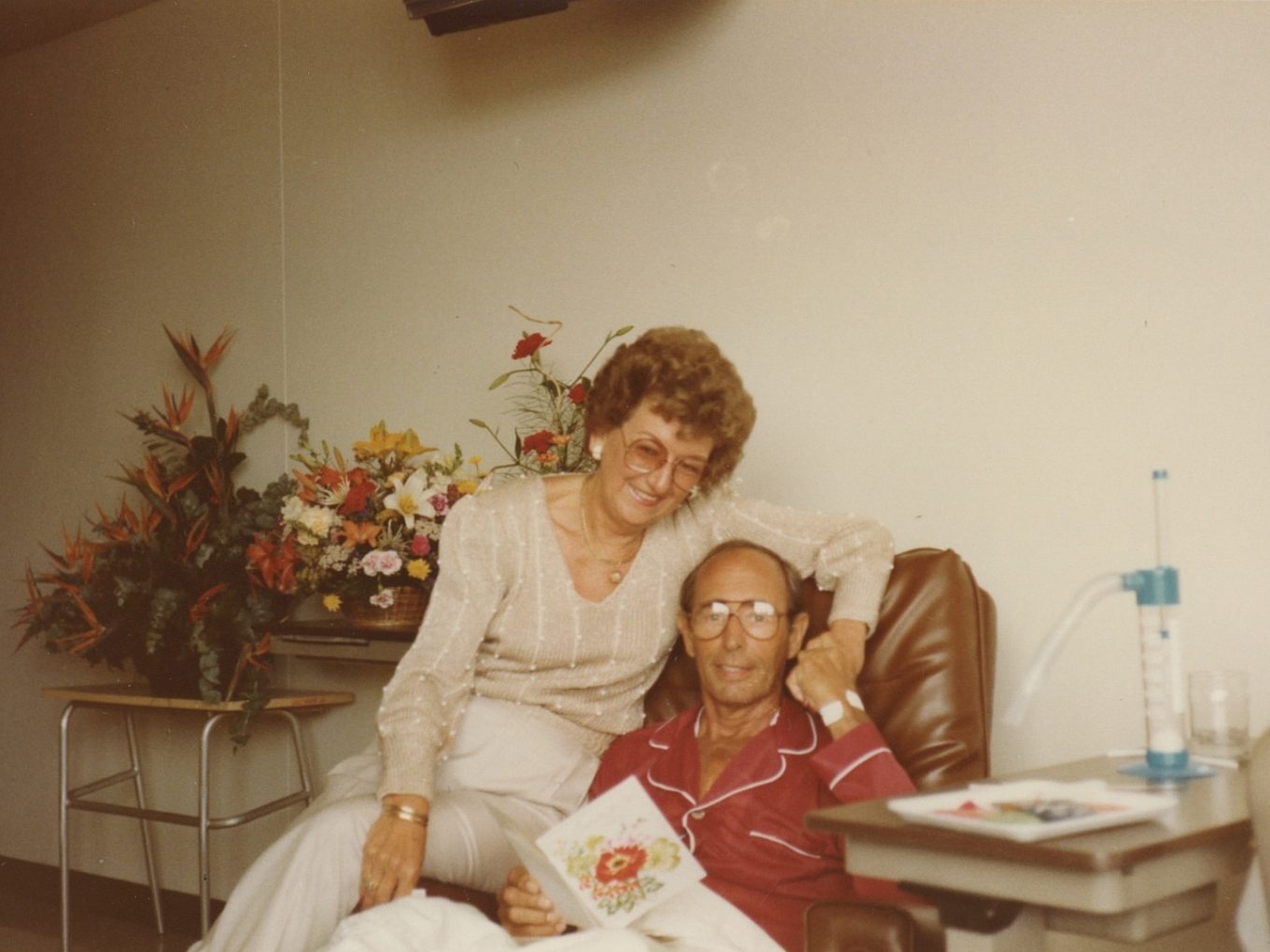 5/7
Rich and Helen are seen in Rich’s hospital room while he awaits his heart transplant in 1997. Prayer brought peace and relief during that time. “The Lord lifted the fear from me,” he recalled. “So Helen and I would pray every morning and read Philippians 4:4-7. That would give us a great sense of peace.” 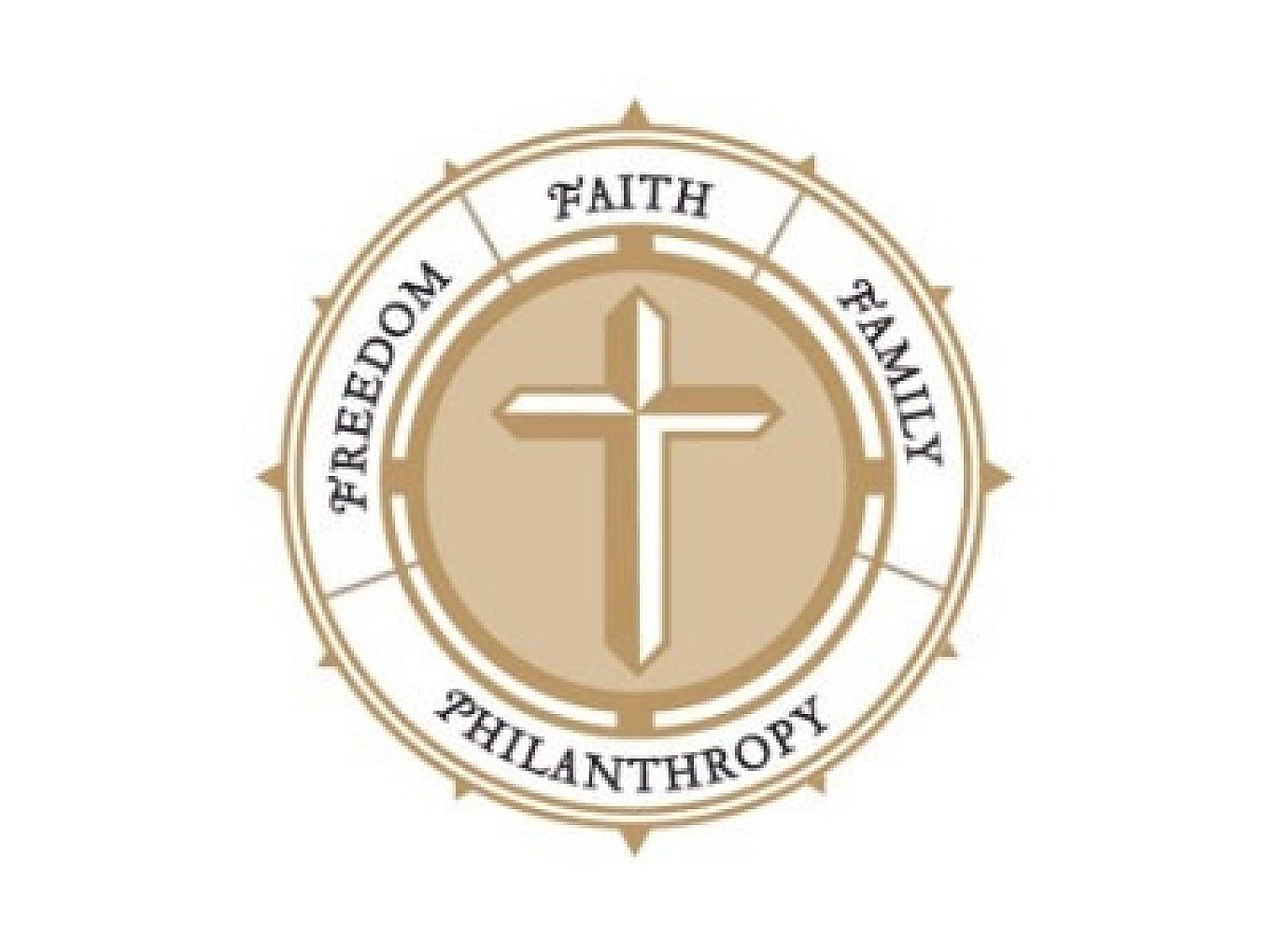 6/7
This compass rose, with points for faith, family, philanthropy and freedom, was used by Rich as a symbol of his commitments and priorities. 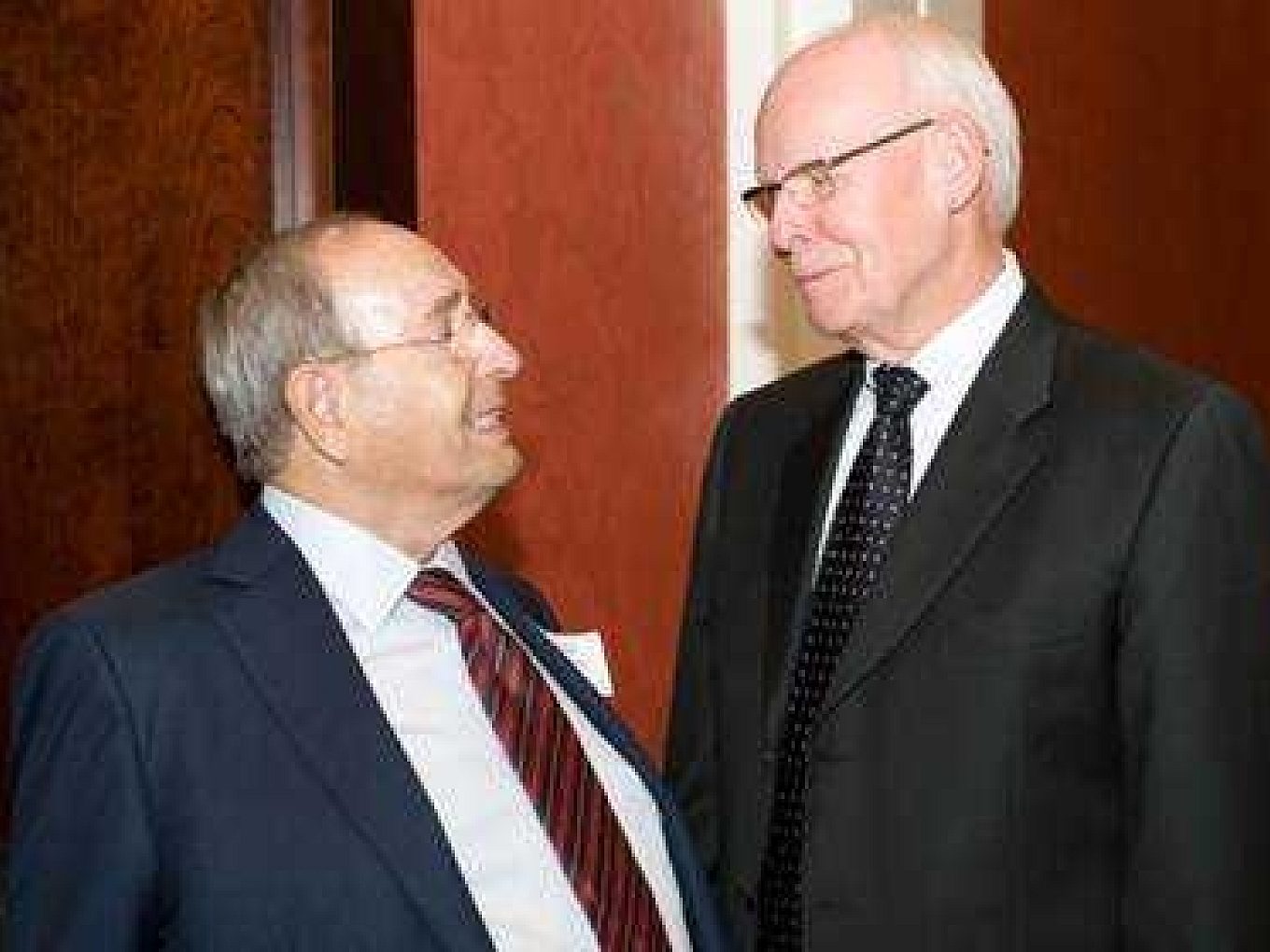 7/7
The Reverend Stan Mast, longtime pastor of LaGrave Avenue Christian Reformed Church in Grand Rapids, was a spiritual advisor to Rich and his family.

His faith was not something that Rich checked at the door when he went to work each day. With his longtime business partner, Jay Van Andel, Rich shared not just an entrepreneurial spirit but also common values and faith.

Together they built Amway as a way to help people live better lives by helping them achieve their potential, leading the company based on the fundamentals of freedom, family, hope and reward.

Faith influenced how they conducted their business and led an organization that spanned the globe. Every Christmas, Rich would read the Christmas story from the Bible to Amway employees during holiday meetings. He called these annual sessions “the most important meetings I’ve ever run.”

“Some of you have never accepted Christ as your savior,” he told a group of Amway employees in 2011. “I pray that you do. When you get close to God, you may have the same problems, but you won’t feel the same way. Because you know God is in command and He will watch over you. Because you are saved, and you are in the hands of God.”

Rich’s faith was also a source of strength and comfort when he experienced health concerns, especially during his wait for a heart transplant in 1997.

“The Lord gave us tremendous comfort during that period. Our anxiety level was low,” Rich said. “The Lord lifted the fear from me. So Helen and I would pray every morning and read Philippians 4:4-7. That would give us a great sense of peace.”

Since then, Rich had regularly recommended this Philippians passage to others, with the hope that it would give them the same comfort and peace that it gave him.

Always be full of joy in the Lord. I say it again—rejoice! Let everyone see that you are considerate in all you do. Remember, the Lord is coming soon.

Don’t worry about anything; instead, pray about everything. Tell God what you need, and thank him for all he has done. If you do this, you will experience God’s peace, which is far more wonderful than the human mind can understand. His peace will guard your hearts and minds as you live in Christ Jesus.

God’s peace was with Rich as Helen was diagnosed with acute myeloid leukemia and suffered a stroke in October 2017.

In her final moments, Rich took her hand and bowed his head, asking God to take her home. He prayed her into heaven.

Faith was also the cornerstone of Rich and Helen’s giving. From the time they were married, they tithed to their church. Later, through the Richard and Helen DeVos Foundation, they supported hundreds of Christian churches and ministries, with an emphasis on alleviating human suffering and strengthening community.

They often said they were inspired to give because of their faith and a responsibility to be good stewards of the financial resources God had given them.

Rich was a man who achieved much, but preferred to be known simply as a believer—in his own words, “a sinner saved by grace in Christ Jesus.”

A festival of faith

Rich’s last gift to his hometown was a celebration of faith that drew an estimated 35,000 people to Ah-Nab-Awen Park over the course of two days for music, sports and children’s activities.Read the story