As a prolific author and speaker, Rich shared insights for business, faith and life 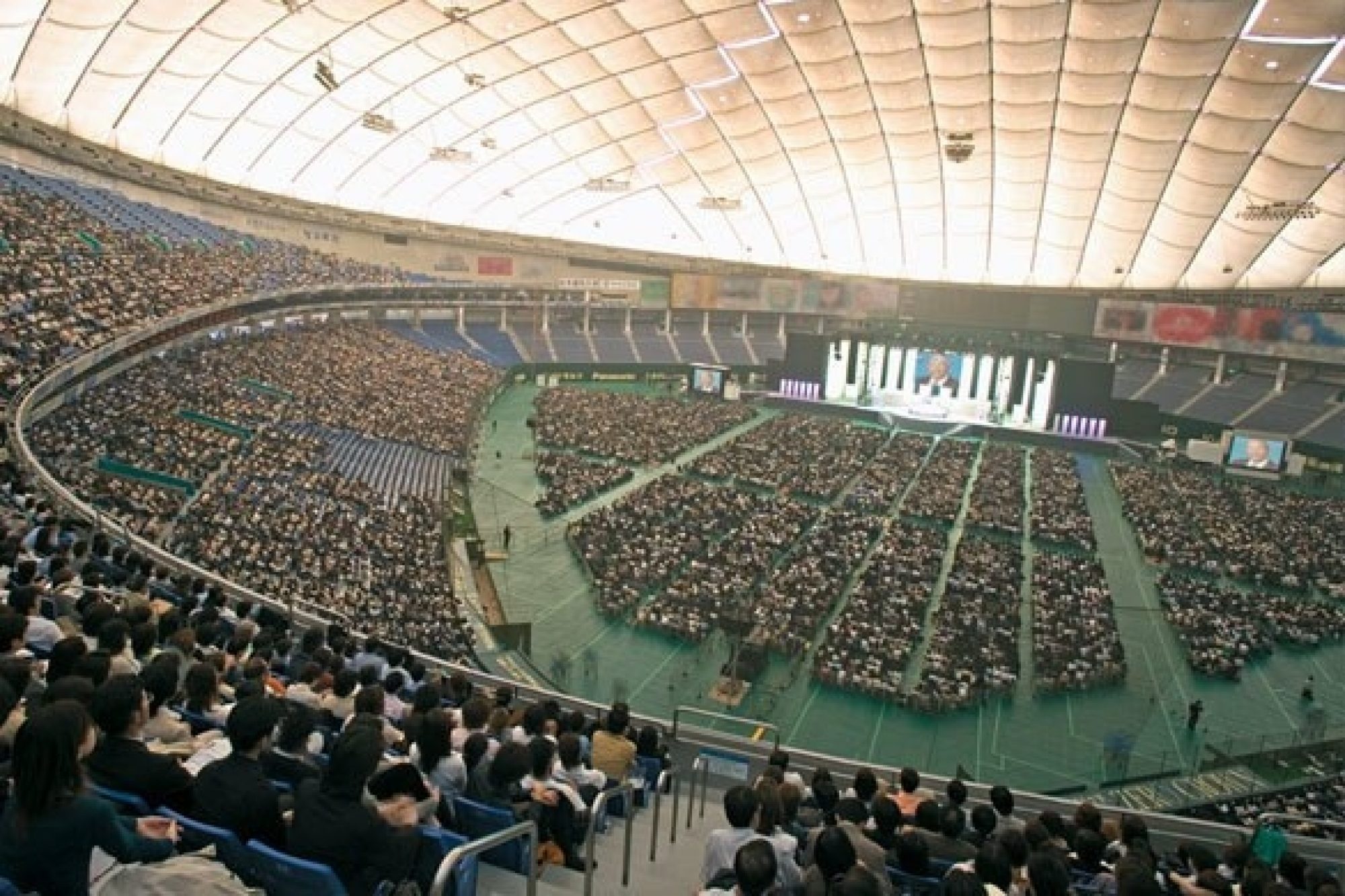 Rich drew crowds whenever he spoke, especially when it was to Amway Business Owners.

The Amway business is built on the concept of helping others succeed. Rich spent his life doing just that.

Whether through small meetings for business recruits in the early days, speeches in front of tens of thousands of Amway Business Owners later on, handwritten personal notes or his five books sharing his views on business, faith or life in general, Rich was generous with his insights for success.

Rich enjoyed public speaking and embraced every opportunity. He always had an eager audience of Amway Business Owners, but his messages often transcended the Amway business.

“Selling America,” a speech first delivered by Rich in the 1960s, was an unabashed tribute to the American free enterprise system. Rich gave many versions of the talk, but each extolled how all Americans have a responsibility to encourage each other, to seize opportunity and to “sell America.”

It was Rich’s testament to the belief that opportunities are there for everyone to succeed and that success is directly related to effort. He challenged his listeners to remember, however, that no one succeeds alone. Words of thanks, recognition or respect can go a long way.

“There is no escaping the impact that you have on others. Every word of encouragement can change the lives of others,” he said.

The speech was issued as an LP record, bringing Rich’s message to a wider audience and securing his reputation as an in-demand speaker. The recording received the Alexander Hamilton Award for Economic Education from the Freedoms Foundation.

Rich also hit home with his speech entitled “The Three A’s” — action, attitude and atmosphere. Those three things can change your life and the lives of those around you, he told his audiences.

Rich advised people to create a positive atmosphere that encourages and supports others to achieve their goals, inspiring them to adopt their own positive attitude and motivating them into action.

“I’m honored to be in a partnership with all of you who are creating that favorable, exciting, dynamic atmosphere throughout the world,” he said. “And that’s why, you see, we have to grow together, because our mission is so great.”

A comment by Walt Disney inspired Rich’s “Life Enrichers” talk, which became popular in the 1990s. The phrase also became Rich’s catchall term for his goal in life.

Disney had described three types of people: “lawn mowers” who take care of their own business but don’t reach out to anyone else; “well poisoners” who are negative and spoil other people’s success or happiness; and “life enhancers,” the people who help others and try to make the world a better place.

Rich keyed in on life enhancers and adopted the phrase “life enricher” to describe an attitude of gratitude, an interest in helping others and a focus on people rather than material success.

“You are doing things for people that they will never forget,” Rich said in his speech. “And as we rededicate ourselves to that cause we will impact this nation and this world and make this a better place while helping you achieve some of your other goals as well.” 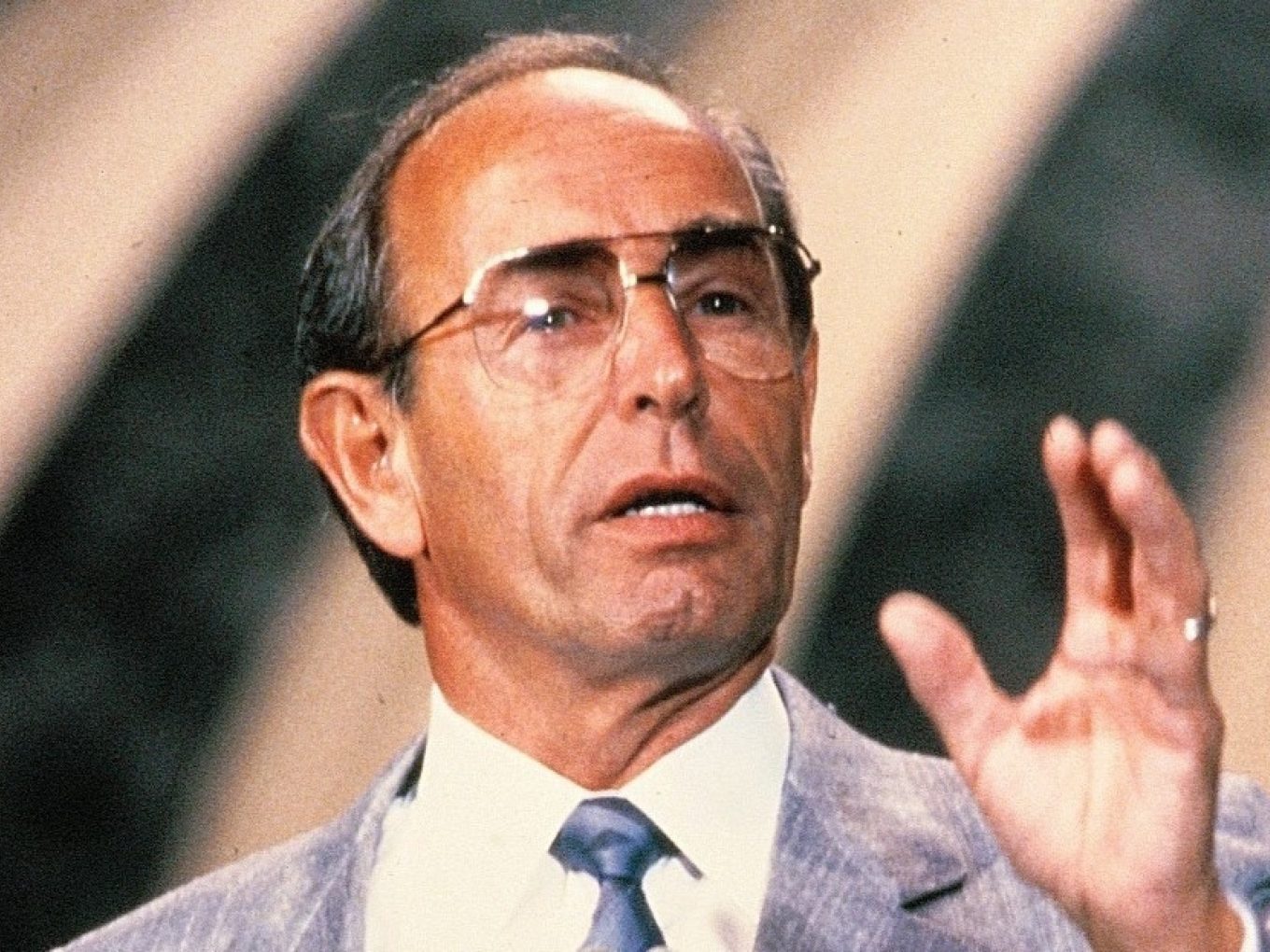 1/3
Rich shares his wisdom and inspiration at a 1985 Amway convention. 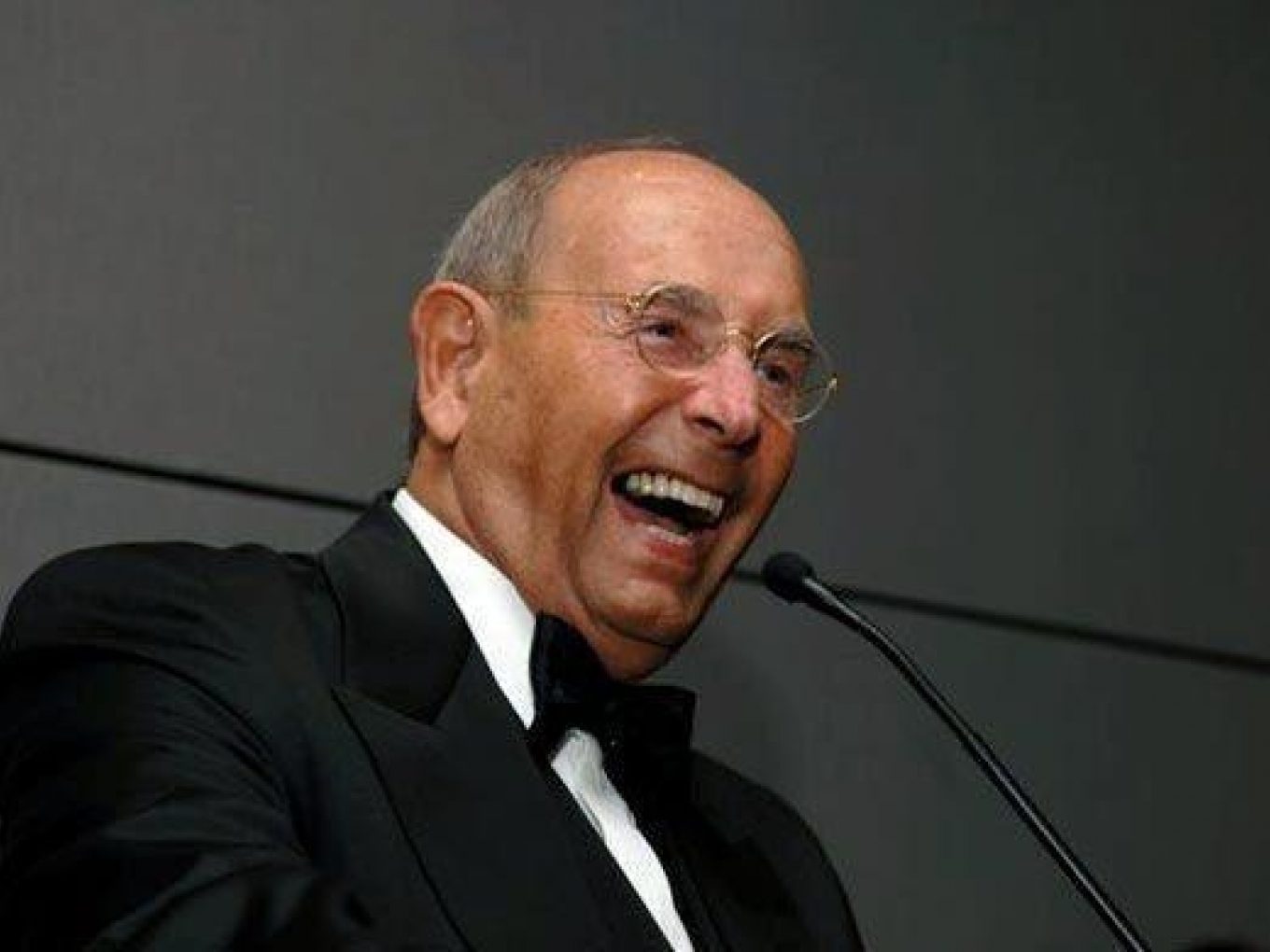 2/3
Rich often spoke to crowds across the country about their potential to enrich lives through an encouraging word or deed. 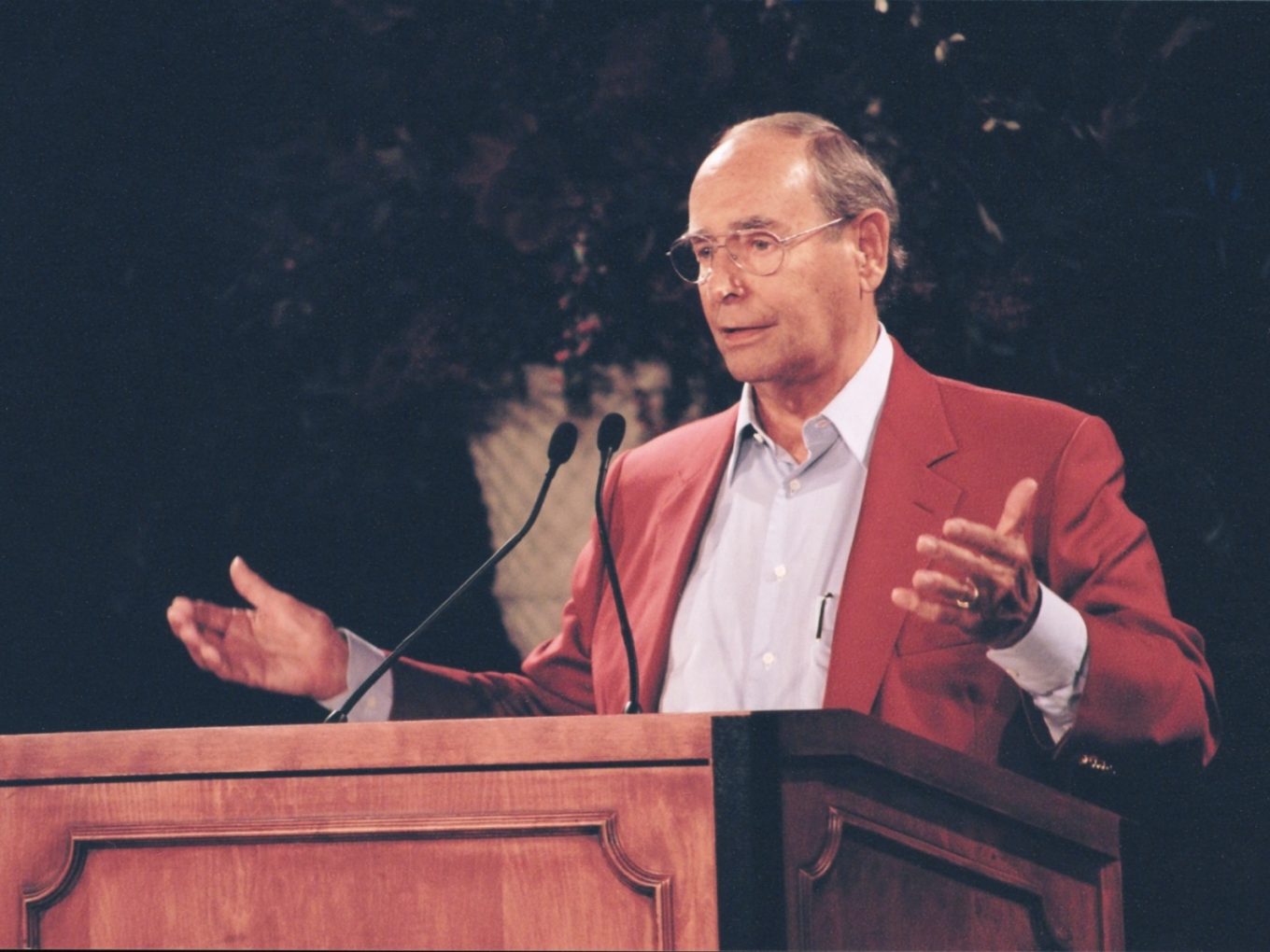 Putting it in writing

When Rich wasn’t sharing his wisdom in person, he was writing it down. Many people were recipients of his personal notes, always signed with a sincere “Love ya, Rich.” But he also put his thoughts on paper in a total of five books penned throughout his career.

In his first book, Believe!, published in 1975 and co-authored by Charles Paul Conn, Rich shared the insights behind the early success of Amway through his personal motivations of “free enterprise, human dignity, God and his church and The American Way.”

That was followed in 1994 by Compassionate Capitalism: People Helping People Help Themselves, which became a national best seller. In it, Rich shared his thoughts on how to be a successful entrepreneur while maintaining compassion for others, decrying the idea that business must be cutthroat. The spirit of capitalism can work side by side with a person’s moral values, which he demonstrated with examples and anecdotes from his own life and those of others.

His next book shifted away from the business world, but still focused on the values on which he based his life. Inspired by the success of his long awaited heart transplant surgery, Rich in 2000 wrote Hope From My Heart: Ten Lessons for Life.

In it, he touched on hope, persistence, confidence, optimism, respect, accountability, family, freedom, faith and grace, relating an experience with each quality along the harrowing journey of his surgery.

“I have always enjoyed learning by doing and in the doing, I have made my share of mistakes,” he wrote. “But most of the time, by the grace of God, I have managed to succeed.” 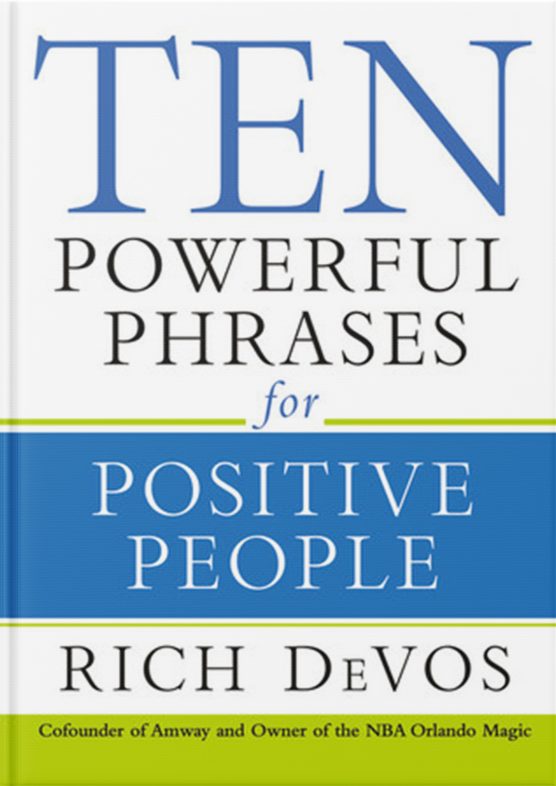 Rich offers the key he discovered in unlocking the powerful potential of ten ordinary yet life-changing phrases. Simply adding these phrases into your daily conversations will allow you to help motivate achievement, instill confidence and change attitudes in your work and family life.

At a young age, Rich learned the value of maintaining a positive attitude and offering encouragement to others. That lesson was reinforced during his entire career by the knowledge and wisdom he gained from his experiences and the influential people he met.

Beyond these practical but profound phrases, Rich also delivers an inspiring message of building hope that resonates in the heart of every human being. Your decision to live with a positive attitude can change your life, your community, even the world.

His fourth book, Ten Powerful Phrases for Positive People, was extrapolated from one of his speeches. “The speech I gave for many years was six phrases,” he once shared with a group of college students. “The publisher said 10 phrases sells better. So, now we have 10 Powerful Phrases.

“But it really doesn’t matter. There are a hundred powerful phrases you can use. You’ll make up your own phrases. The purpose of this book is to teach you how to be what I have termed a life enricher.”

Drawing on the wisdom he had gained over the course of his 82 years at that time, Rich shared the tremendous power that can be had in sincere communication such as, “Thank you,” “I’m wrong,” “I’m sorry,” and of course, “You can do it!”

Lessons of a lifetime

Rich published his last book, Simply Rich: Life and Lessons from the Cofounder of Amway, in 2014. It is the most personal book written by him, including his thoughts on his marriage and family, his experiences as a motivational speaker, his ownership of the NBA basketball team Orlando Magic, and his philanthropic, religious and political endeavors.

Each word he wrote or spoke was designed to be in service to his philosophy of life enrichment.

“A constant in my life has been maintaining a positive attitude and affirming others,” Rich once said. “I’ve tried all my life to inspire others to use their talents and fulfill their potential.”

Words to live by

Rich spent his life and career being a motivator for people all over the world. Read and listen to some of his most popular speeches.Speech collection